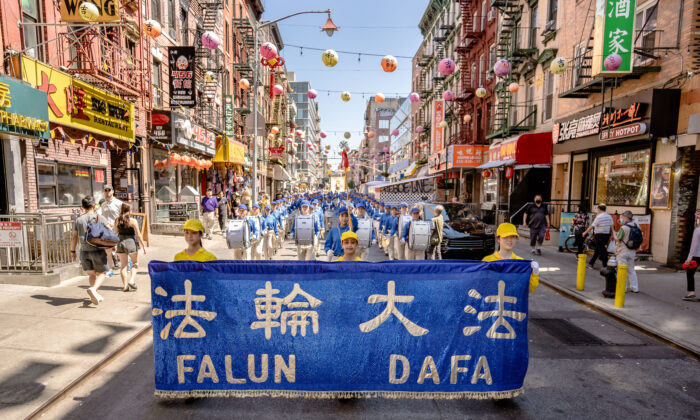 MANHATTAN, New York—Hundreds paraded in lower Manhattan through one of America’s oldest Chinese communities to protest ongoing abuses in communist China that the international community has described as “crimes against humanity.”

It marked the first time in almost five years the participants were back to Chinatown, home to one of the densest Chinese immigrant populations in the country. Prior requests since 2017 had been repeatedly turned down, which, the event organizers suspect, were in part the result of Beijing’s influence.

The event, according to organizers, served a dual purpose: to put pressure on the Chinese communist regime that has been arresting and torturing faith adherents, while raising awareness about these violations among the Chinese diaspora.

“You can just see for yourself what we are all about,” Pengfei Yan, a 27-year-old computer graphics designer attending the parade, told The Epoch Times.

Most of the participants there were adherents of Falun Gong, a spiritual discipline that has been the target of a 23-year-long persecution at the hands of the Chinese Communist Party. The meditative practice, which espouses the principles of truthfulness, compassion, and tolerance, attracted about 70-100 million adherents in China by 1999. That year, the regime, threatened by the practice’s popularity, unleashed an expansive campaign of persecution, one that continues today.

Millions of Falun Gong adherents have since been imprisoned in various detention centers, prisons, and other facilities, where guards deploy slave labor, forced feeding, and other torture methods in a bid to make them renounce their faith. An untold number of those detained have also been killed for their organs to supply China’s hungry organ transplant system, in a state-sanctioned practice known as forced organ harvesting.

‘We Have to Stand Up’

Yan was only three when his mother took him to the United States in 1996. But one of his good friends in China was imprisoned for years over his belief, and only escaped the country about five years ago, during which time the man’s wife had to take care of their son, now nine, all by herself.

“I couldn’t imagine myself going through that,” Yan said. “The government in China is really taking advantage of this compassionate group of people.”

Yan has been to over 20 Falun Gong parades growing up. Helen Peng, his mother, remembered that during the early years, they would drive or fly to all over the world—spending 10 hours on the road at times—to events calling for an end to the persecution. There was a burning urgency driving them, she said.

‘What the CCP Opposes Is Definitely Good’

Peng started practicing Falun Gong in 1996 after her friend wrote to her recommending the faith. Afterward, the pains in her waist, which made basic house chores such as mopping the floor a painful exercise, vanished without a trace, according to her.

Her family had experienced the regime’s ruthlessness firsthand. Her grandfather, who fought for the opposing Nationalist Party before the regime took power in 1949, committed suicide during the 10-year Cultural Revolution when he became the target of retaliatory “struggle sessions.”

In 1989, when a student-led protest in Beijing calling for democratic reform in China ended with military tanks and gunfire, Peng watched Chinese official media proclaiming that “no one died” even when her medical colleagues who worked in the city’s hospitals described to her “a river of blood” that extended to the facilities’ basements.

Because she helped to coordinate Falun Gong exercise sites in the United States, Peng’s name got onto Beijing’s blacklist, and police harassed her family in China, she said. She wasn’t able to go back to China to attend the funerals of her father and brother.

The atmosphere in China, full of fear and indoctrination, formed a sharp contrast with the freedom they enjoyed in America, she recounted. When her mother came for a visit, Peng remembered her echoing state propaganda vilifying the practice, and trying to persuade them to give up the belief.

Peng’s neighbor, who was also part of the conversation, came to Peng’s defense, saying: “What the CCP opposes is definitely good,” she recalled.

Cheng Song, a 33-year-old professional percussionist who performed during the parade, said he struggled to find words to describe his excitement.

“The smile on every fellow practitioner’s face, the positive energy from everyone … I don’t think anything can compare to this,” he told The Epoch Times.

Cheng, originally from China, first heard about Falun Gong in Germany in 2016 when he was a student at Hamburg’s Brahms Johannes Conservatory. He began practicing the discipline in 2019 after he returned to China.

The police, who tapped his phone, summoned Cheng for interrogation twice. Each time, they had posed as the parent of a prospective student looking to take music lessons with him, he said. The two interrogations amounted to two sleepless nights, during which three or four officers, smoking boxes of cigarettes, threatened him with jail time.

Despite the pressure, Cheng had made his choice.

“Every person with just a bit of conscience would stand up and say no, and choose the side of justice,” he said. The musician came to the United States late last year after pandemic travel restrictions had eased to escape the persecution.

The parade appeared to be marking a mark on some passersby.

“It’s very touching and emotional to see how many people are trying to end the torture,” said Estella Pena from the Dominican Republic, who held a Falun Gong flyer in hand. Her friend, Lia Brouwer, agreed. Brouwer’s eyes were still red—a result of her crying earlier while learning about what the adherents went through, she said.

Miranda Pena, who was with them attending a concert in New York, said that she plans to sign a petition to end forced organ harvesting. She has read about the regime’s systemic indoctrination in schools, and the suffering of people in that country has given her more inspiration to speak up, she said.

When “you read about it or see it, I think it kind of pops that bubble, that fiction bubble where we live and you’re able to see how hard people are living,” she told The Epoch Times. “It makes me want to fight or do something about [it].”

You Have Just Five Minutes Left to Live – What Are Your Deathbed Regrets?

Mike Pompeo Offers to Visit Taiwan With Nancy Pelosi Amid...

US and China Sign Audit Deal to Prevent Delisting of Chinese...