Chinese Breast Cancer Patients Under 40 Are Less Likely to Survive 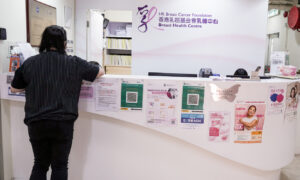 The Foundation published its 14th Annual Study on Sep 28.

The research team examined the records of 7,930 Chinese patients diagnosed with breast cancer between 2006 and 2011, amounting to 42.5 percent of the total cases. The researchers followed up with 62.3 percent of those patients or data diagnosed with breast cancer for ten years, making this the first most extended survival ratio study in Hong Kong.

The report summarized data on nearly 20,000 breast cancer patients recruited from 2006 to 2018 and found that 60 percent of the patients suffered from three or more common risk factors.

The four most common risk factors for breast cancer are exercise, breastfeeding, obesity, and stress. Women who have never breastfed, lack exercise routines, or are chronically stressed are more prone to breast cancer.

Additionally, 80 percent of the patients inadvertently discovered the illness, while only 11 percent realized it with a mammogram.

The report found that younger breast cancer patients under 40 had a lower survival rate, mainly because they are less vigilant about cancer.

The diagnosis would usually be later and at a more advanced stage for patients who only seek medical assistance when they discover hard lumps or other symptoms.

Winnie Yeo, a member of the Steering Committee of Hong Kong Breast Cancer Registry, reiterated the report that showed that cancer in younger patients (under 40 years) tends to be more aggressive, such as with higher tumor levels.

In the analysis, 41.8 percent of patients under 40 diagnosed with malignant breast cancer had grade 3 tumors, compared to those between 41 and 50 at 37.2 percent. Grade 3 tumors are tumors that are more prone to progressive deterioration.

Polly Cheung Suk-yee, the Hong Kong Breast Cancer Foundation founder, said, “Young women generally do not notice cancer or believe that young people have cancer only due to family genetics. But, in reality, 95 percent of patients with cancer are because of acquired factors, including the risk factors mentioned above.”

Cheung recommended that the public maintain a healthy diet and exercise at least three hours of moderate-intensity workout per week to improve the body’s ability to resist cancer cell lesions. She also urges the government to carry out universal breast cancer screening gradually. Foundation President Eliza Fok advised women over 40 should have a mammogram every two years.

Why will some western companies pay a hefty price for ignoring Jiang Zemin’s brutal...

When Prescriptions Harm You